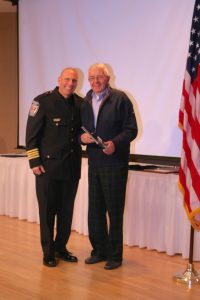 Last week, the Plymouth Public Safety Department held their 27th Annual Recognition Event. One of our own, Corky Ornburg, was surprised with the Public Safety Legacy Award for his 40 years of volunteer services to the PCFPF. Public Safety Director, Mike Goldstein, made the presentation.

The next special award we are giving out, we’re calling the “Public Safety Legacy Award”. We’re giving it this name because it is going to someone who has had an enormous influence on our department for many, many years.

It is both my honor and my pleasure to announce the recipient of this special award to Corky Ornburg.

Many of us have known Corky personally over the past 40 years. We have worked with him, have volunteered with him, and have come to appreciate his friendship and his quick wit. But we may not have been aware of the many projects that he has accomplished, things that have had a direct influence on each of us.

Those things that we may have taken for granted are now an integral part of our lives … things like bullet-proof vests, the K-9 program, DARE, SWAT, the Reserves, the Explorers, and programs for Crime Prevention and physical fitness. All these have origins in the work of the Plymouth Crime & Fire Prevention Fund, of which Corky has been a member for decades.

It was in 1976 that a group of residents and business owners came together to find a way to support and advance the work of the Plymouth Police Department. Initially the goal was to raise money to purchase a bullet-proof vest for each officer, and at the time such vests were not required by state law.

A year later the group incorporated as a nonprofit – the Plymouth Crime Prevention and Criminal Apprehension Fund. They not only raised the funds necessary to buy those vests but also continued to support projects focused on the safety of officers and crime prevention. Plus, they provided reward money for the apprehension of criminals.

In 1978 then-Chief Richard Carlquist and Officer Bob Nesbitt asked Corky Ornburg, a young father of three and math teacher at Birchview Elementary School, to join the executive board of the Plymouth Crime Prevention and Criminal Apprehension Fund. Corky, whose father was a career Minneapolis firefighter, had grown up learning the importance of public safety, so it was natural for him to join the executive board, and then to serve as Treasurer. That was nearly 40 years ago.

During those 40 years, Corky has worked passionately to help both the police and fire departments, taking on cutting-edge initiatives that were unable to be included in the city’s operating budget.

Two projects that have been especially dear to Corky’s heart are the K-9 program and the scholarship program.

· In 2004 the scholarship program was set up to help those wishing to further their education in law enforcement, fire science or emergency medical services. And over the past 13 years more than $80,000 has been awarded to deserving individuals who wish to serve through public safety.

Corky has been part of many other projects that have had an effect on the work of both the police and the fire departments. Some of those accomplishments include:

· A $72,000 SWAT tactical vehicle, a tactical ballistic shield, camera surveillance equipment and a recon Scout mobile surveillance camera; ballistic helmets and other SWAT equipment for the police department; and

· A water and ice rescue boat, a Ford utility vehicle, thermal imaging cameras and AEDs for the fire department.

And those are just a few of the many ways that Corky Ornburg has had an immense influence on all of us.

So, Corky, it is with deep gratitude that we present you with the “Public Safety Legacy Award.”